I couldn’t get enough of Korg in Thor: Ragnarok. Here’s my story at Cartoon Brew about how the character was made.

The explosion in visual effects work in comic book films is perhaps only matched by the explosion in design work also seen in those movies – everything from logo reveals, to main-on-end titles, screen UIs and other designs.

One of the studios behind much of this work is Perception, based in New York. It recently tackled Thor: Ragnarok’s logo reveal, main-on-ends and other design elements seen in the film, which took on a very ‘Kirby’ and sometimes retro feel. vfxblog asked some of Perception’s key creatives how they accomplished the designs. END_OF_DOCUMENT_TOKEN_TO_BE_REPLACED

One of the scenes, as brief as it is, that really caught my eye in Thor: Ragnarok, was the Bifrost journey taken by Thor, Loki and an uninvited Hela. A mid-journey fight ensues, which ultimately sends Thor and Loki to the planet Sakaar.

We’ve seen the Bifrost before, but this time visual effects supervisor Jake Morrison and visual effects studio Rising Sun Pictures made it somewhat more crystalline. They also dealt with what happens when a character strays through its edges, coming up with a technique that included just the right amount of camera shake. Morrison and RSP 2D lead Jess Burnheim break down the work for vfxblog. END_OF_DOCUMENT_TOKEN_TO_BE_REPLACED

3D Artist’s latest cover story is a piece I wrote on Blender’s Agent 327, an awesome short designed to showcase the 3D tool and collaborative workflow.

One of the featured sessions at SIGGRAPH Asia in Bangkok (27-30 November) is How Real-Time Graphics Helps Pixar Make Feature Films, being presented by senior graphics software engineers David Yu and Pol Jeremias-Vila.

I got the chance to ask them a few quick questions about what real-time graphics and effects initiatives are in use at Pixar, and what their talk will involve at SIGGRAPH Asia. END_OF_DOCUMENT_TOKEN_TO_BE_REPLACED

Territory Studio is behind some of the coolest UI and screen graphics you’ve seen in recent films, from Prometheus to Ghost in the Shell and now Blade Runner 2049. What better way to see what they did for the Denis Villeneuve film than just let them show off their visuals. Here’s a look at designs and finals from the film, along with their notes on how they were made. END_OF_DOCUMENT_TOKEN_TO_BE_REPLACED

That line begins the 1997 trailer for Starship Troopers. When I first saw that trailer I was spellbound. When I first saw the film, and realised there was A LOT more going on in the Paul Verhoeven film than people realised, I was hooked. It’s got to be one of the best satires made, and it sure has some of the best VFX I’ve still seen – thanks to a lot of players, from Tippett Studio to Imageworks, ADI and more. Recently I sat down with Phil Tippett to discuss the bug work, and how the film was greenlit, and what he thinks of VFX today – I was giddy doing this interview. Hope you enjoy it at Cartoon Brew. 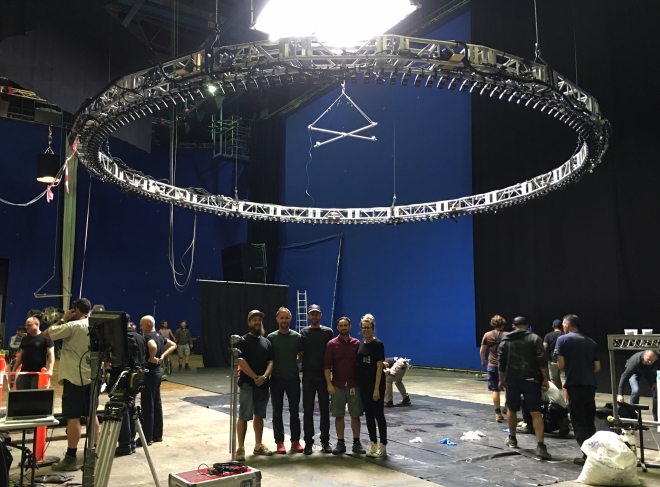 A flashback to Valkyrie’s battle against Hela in Thor: Ragnarok is shown in deep slow-mo – it’s one of the coolest scenes in the film, and new in-camera lighting tech on a rig reminiscent of bullet time from Satellite Lab and VFX by Rising Sun Pictures helped make it possible. Find out more at SYFY WIRE.

Amongst the many and complex visual effects sequences in Taika Waititi’s Thor: Ragnarok, the final battle on Asgard is perhaps the most epic. Here, the evil Hela (Cate Blanchett), her d-guards and massive dog Fenris take on Thor (Chris Hemsworth), Hulk (Mark Ruffalo), Valkyrie (Tessa Thompson), Loki (Tom Hiddleston) and several other characters, including a giant version of the fire demon fire demon Surtur.

It’s a sequence that involved significant fight choreography, CG character animation, enormous destruction and a surprising twist in Thor’s superpowers. Here’s a look at how Framestore, working with overall visual effects supervisor Jake Morrison, pulled off some of the battle’s key moments. END_OF_DOCUMENT_TOKEN_TO_BE_REPLACED

Ian Spriggs is a character artist with experience at several visual effects studios and most recently at Neill Blomkamp’s Oats Studios. Here, he has taken on some of the most elaborate modelling and texturing tasks of his career. Spriggs is also well-known for his CG portraits and self-portraits, including one of Blomkamp himself.

I sat down with Spriggs for THU TV at Trojan Hose was a Unicorn, and you can read a transcript of our conversation below, where we dive into his portrait work, coming on board and Oats and crafting the incredible Zygote creature for one of Blomkamp’s shorts. END_OF_DOCUMENT_TOKEN_TO_BE_REPLACED