“We have a tonne of data, we actually went a bit nuts on the film and we just over-covered.” – Chris White, Weta Digital visual effects supervisor

When I watched some of the b-roll footage for Wes Ball’s latest Maze Runner film, The Death Cure – releasing soon on home entertainment – I was really struck with the nature of the shoot. Lots of sets, and lots of partial sets, that would ultimately be filled in with visual effects. So when I talked to Weta Digital’s visual effects supervisor Chris White about how they approached the VFX in the film, I wanted to narrow in on what it took to take the live action shoot through to finished effects shots.

Here’s a run down of how principal photography was taken through to final shots by the Weta Digital team, focusing on just a few main sequences from the film: the opening train heist, scenes in Last City, the WCKD building jump and the rooftop escape. Plus a special look at some make-up effects enhancement.

Thomas and the free ‘Gladers’ attempt to free their friend Minho from a WCKD transport train. They commandeer an aerial vehicle – a Berg – to lift up a carriage of the train to fly it away.

The visual effects team actually went to the shooting location – outside of Cape Town – a few weeks before the shoot to scan the environment. “We had a tonne of data, we actually went a bit nuts on the film and we just over-covered,” says White. “We were doing LIDAR scanning of every area, lots of photography, and we had a drone crew down in South Africa. They were able to fly the drone around some of the surrounding mountains and hills and photograph from all the different angles that are really hard to get.

“For the train sequence, we also set up a three camera rig on this car that could run along the tracks with three Alexas covering it at maybe 720 degrees,” details White. “And then we also went and filmed and photographed plants and plant elements.”

For shots of Thomas first hooking onto the train from a moving vehicle, the car was actually static with some grips shaking it. “It was behind the true train that was there on location but we knew we were going to go back and add the moving wheels and add the CG environment around it and, for many of the shots, replacing the train because we needed the train to be rocking and travelling at speed,” notes White. “So most of those shots in the train sequence was us making it travel but it was important that we filmed it in the location with the true lighting.”

“One thing I wanted to make sure we did was,” adds White, “as we were filming the actors, we had a second car that was further down the tracks where if the stunties weren’t busy, they would mimic the positions on this other car that didn’t have a greenscreen behind it so I could give the compositors and the lighters film reference of what exactly it should look like once we put the scene back together. So there’s one section where we had a greenscreen behind it, but we were also shooting a lot of reference of the environment without the greenscreen with stand-ins and with the duplicate car so we could really say this is what exactly it should look like if you pulled out the greenscreen and we replaced the background.”

Eventually the Gladers manage to free one of the train carriages and it, and several of the rescuers, are lifted away by a captured Berg. A real carriage was lifted by a crane with the actors secured to it to provide a sense of the movement. The shot then transitions to a Weta Digital CG carriage. “We also added in the Berg and adjusted the terrain to give a sense of it flying further away,” says White.

Arriving in the Last City, Thomas and the others happen upon an old foe, Gally, who ultimately helps them get inside the fortified walls. But this is not before WKCD fires upon them and some protestors in a show of force.

A practical set in South Africa, with practical explosions, lay the foundations of the scene. Weta Digital added the slum areas, the wall and city views, and then also matched real explosions with CG ones, plus additional crowds and even some unfortunate souls flying through the air.

“I like that sequence because it is softly integrated in terms of the lighting, it feels natural to the plates,” comments White. “We kept a lot of our lighting and rendering to just have a realistic natural feel instead of over-lighting it. It feels like it’s something you just filmed.”

In recent films, including War for the Planet of the Apes, Weta Digital has focused heavily on matching practical explosions with their digital versions. “We got some information from how they did it on set,” describes White. “Matt Sloan, the studio visual effects supervisor, got in contact with the effects team down in South Africa and we got more information about how they set it up, and what kind of charges they used – the same thing went for the train sequence. Our FX group matched the look of it as close as they could.”

“There’s actually one shot in the train sequence,” continues White, “it was so well integrated in the effects that we were looking for a good sky in the train sequence and there’s one shot where there’s a lot of explosions going off from the truck and we all thought, ‘Oh that’s got a good sky in it, we’ve just got to find a clean area of the plate where it’s not covered by explosions.’ And then after that, all of us realised that was our CG explosions that we had put in, that they were so well integrated that we had forgotten for a moment that we already had a clean plate, there was no explosions in that shot.”

Inside the Last City, Thomas and co look to infiltrate the main WCKD skyscraper. For scenes inside the city, production filmed in and around Cape Town, with Weta Digital then integrating its digital buildings (around 800 in total) and other extensions into those plates. Much of this was also about ‘futurising’ the views – which were often nighttime shots – and making everything go much higher. The studio also spent significant effort in ensuring the inside areas of buildings, especially office towers, had extra life. 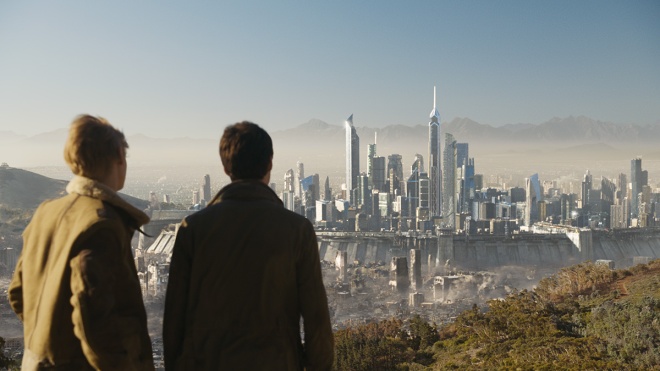 “In the past,” says White, “we’ve done techniques where you would see through the glass and you would see images projected in the room but here we decided we were just going to dress all of the rooms, to put in tables and chairs and doors and even doorknobs. So all of the buildings in our digital city have actual rooms with lights and light fixtures and it gave us a great look because the light would spill out of the rooms properly. It worked really well in our renderer Manuka.”

“A similar thing,” continues White, “just to get that natural feel, we really matched the exposure and the lighting and how do people light up buildings and the LED strips, we made sure they were nicely broken up so when the bokeh for the out of focus shots bloomed it was correct. It was about a lot of subtle integration just to make sure that city felt natural.”

A trademark city shot has the group high up inside the WCKD building but then escaping by smashing a window and jumping into a water feature below. The camera follows them – through the window – as they make the leap, and the whole city vista is viewable in the background.

Says White: “It’s one of my favourites. That was shot on a stage and the actors would jump out of a window but the drop was not very far onto mats. Then we did a handover to our digital doubles for the three guys and as they’re coming out the window and then we follow them all the way down.”

Meanwhile, Brenda commanders a bus to rescue several Gladers who had been kept prisoners by WCKD. A plan is concocted for the bus to be picked up by a crane and lifted out of the city – it spectacularly glides over the cityscape before coming to rest on its nose and eventually on all four wheels. 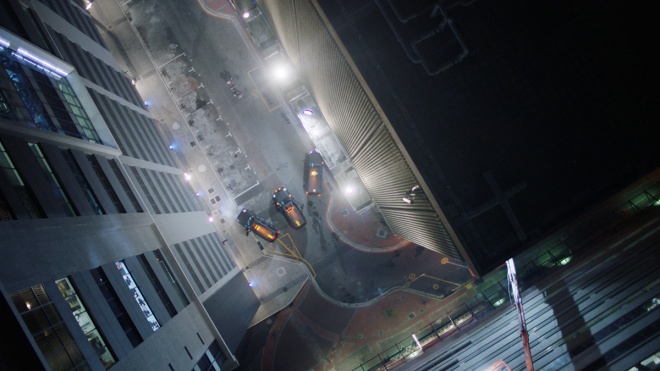 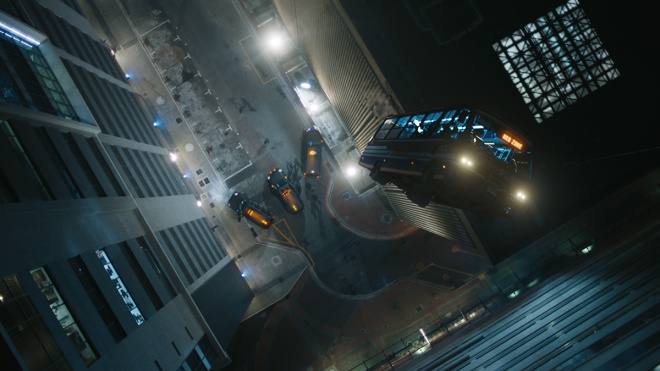 Parts of the scene were filmed in a dry dock in Cape Town, which resembled parts of the wall around the city and had the desired combination of concrete and metal look. Weta Digital filled in the surrounds with buildings, slum areas and their CG wall. The practical shoot also had an unexpected bonus result for the sequence, as White relates.

“The on-set supervisor said when they practically dropped the bus, Wes had had hoped that it would be great if the ‘out of service’ light went on when the bus fell, that that would be a great gag. They looked at it and there was no way that they could actually rig it because it was just this little switch, and so they said, ‘Unfortunately we just can’t rig it to do that’. But then when they dropped the bus, just by happenstance, a piece fell and hit that switch at just the right time to cut the out of service light on, right exactly when Wes wanted it. It’s just this perfect luck and that played as a great gag, the audience really liked that part.”

Thomas, now united with Teresa, find themselves on the rooftop of the WCKD skyscraper, but around them the city is on fire, and buildings are crumbling down. An attempted rescue by a flying Berg only manages to save Thomas, with Teresa falling down into the flaming building and debris.

The set for that sequence was a platform filmed against greenscreen, with only some practical fire. A partial Berg fuselage was positioned on a gimbal to move around with the actors on it.

“For our part,” outlines White, “we set that building on fire and we simulated the crumbling of the other buildings. Wes wanted to have a beautiful look to it as well – to not just be this raging inferno so we had to sculpt certain fire sims and give it a chaotic but beautiful look with all the embers and everything flying through.”

In addition to some heavy environment builds and destruction sims, Weta Digital also contributed a range of visual effects for The Death Cure that audiences may probably not have noticed. This included some seamless alterations of the transit station Teresa runs through when she thinks she has spotted Thomas and the marrying of footage for the opening train sequence shot in separate locations. Another invisible effects solution was required for Lawrence’s nose. The actor wore a prosthetic, with digital artists then needing to enhance the extent of empty space around it. 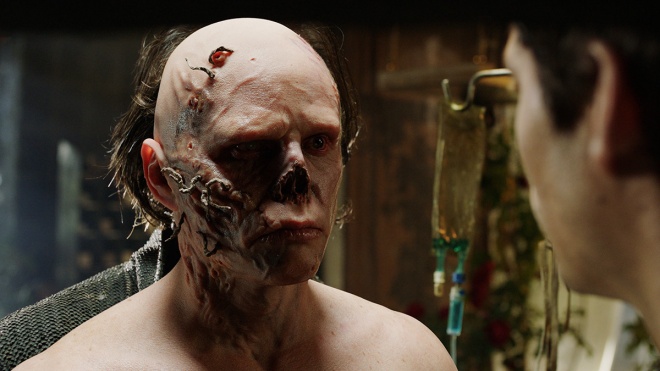 “Even just the CG nose work was quite extensive,” notes White. “Because he’s giving a speech, we needed to animate around his entire face, the movement of your jaw and your lips and all that surrounds effects that little bit of movement around your nose so the animators had to go in and match his speech for many shots. We actually rendered the entire head and then did soft blends into the lips and the surrounding parts of the face, just to make sure it was well integrated.”