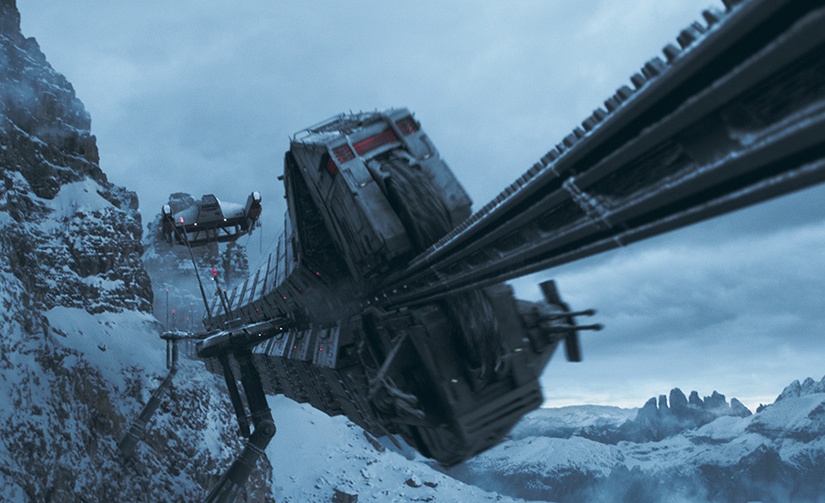 All aboard the conveyex train heist: the VFX behind one of Solo’s biggest sequences, with chopper scouts, simulcam shoots, a lot of great roto and miniature underwater explosions

In this vfxblog breakdown, Solo visual effects supervisor Rob Bredow – who is now also SVP, executive creative director and head of Industrial Light & Magic – shares the art and science behind the conveyex train heist. This centrepiece scene in the film takes place on Vandor and involves the attempted seizure of valuable coaxium from an armoured train by Beckett and his gang, include Han Solo and Chewbacca, only to be foiled by Enfys Nest. The result is a failed mission and a spectacular coaxium explosion that takes out the side of a mountain.

Rob Bredow: The first thing was to first work out the basic beats of the sequence, and we did that with traditional previs. That was done with The Third Floor team in London to work out the basic aspects of the beats, and what kind of camera coverage we were going to use. One of our premises of the sequence was every camera was going to be a camera that we could have implemented if we had a real train running on the real side of a mountain at speed. So we didn’t want to cheat and put magic cameras in places that you could only do if you were doing it with digital effects. We wanted to have everything based on real, grounded cameras.

Then we scouted for a real location for this to take place in. We found a fantastic location in the Italian Dolomites, in amazing canyons with 6,000-foot drops. Once we found a few of the key areas that we wanted to shoot in, we actually photo-modeled all that. So that was like 25,000 photos that we used to create high resolution and accurate mountains that would actually play out in the real scene. Then we updated the previs, instead of being in hypothetical mountains, now we have real locations that each of the shots was going to take place in.

Then I used that previs to go out and get the background plate photography. I went out when the weather was right and we had the right amount of snow coverage. I went out and shot for about a week in the Dolomites with an Alexa 65 on the nose of a chopper, and we shot for six days, 120 different plates of aerial photography. A lot of those shots that you see in the sequence are either all aerial photography, or a combination of aerial photography and digital mountains to enhance or adjust the real locations to meet the story requirements of the shot.

Then the final set of elements was of course shooting on the soundstage with the actors, and for that, the special effects team, led by Dominic Tuohy, built a full train car and two halves of train cars on gimbals, so we could do all the stunts between the train cars. The full scale train car could actually be lifted up into the air 30 feet and pivoted over on its side more than 90 degrees. It could do that in just a couple of seconds, and it weighed many, many tons. They had an enormous hydraulic ability to be able to move that thing around, even faster than what’s safe, then they had to slow it down when we put our principal actors on the top.

Thank goodness for roto and paint

We did try to avoid – especially for Wookies – we tried to avoid roto’ing Chewie. It was no small feat, especially when you’re 30 feet in the air in a giant soundstage with 100-mile-an-hour wind blowing on you and a tilting train. To get the bluescreen coverage that you need for a Wookie is no small task. The second unit team who was shooting those shots had almost endless patience for giving us the time we needed to get those bluescreens up and lit, and then reconfigured every time the camera would tilt another 20 degrees.

A lot of what you see in the movie is pulled keys, but then of course there are definitely times where we needed to resort to roto. One thing that won’t be lost for your readers is, after we did the photography, Ron Howard asked if there was any way we could get a little more frost on the train. I wouldn’t say we replaced the practical train with digital trains, but we did have a digital version of the train with the frost on it that we would put in as necessary. There was a whole frost pass that was done on every one of those shots, and of course there was no bluescreen there, so that was definitely careful frame-by-frame work to get the frosty train underneath the Wookie. If you notice, Han is also wearing a furry costume in the 100-mile-an-hour wind, so there was nothing but soft furry edges there.

A really important part of the workflow was using a simulcam on set with real-time compositing from Ncam. Every time we were shooting a shot on the train, you were not only seeing the actors and the train, which were practical, but you also saw the digital train extended off in either direction, and the track, and the mountain that you were on. Every one of those shots was shot with a simulcam that gave us the ability to get a real-time comp on set. It had a few advantages. Of course, it gave the camera operator the ability to walk over to the monitor, or to look at a feed on their camera, and see a preview of what the final shot would look like, which is great for composition.

That was the driving force for doing it, was to get the compositions right, and it really benefited me in that way, but it also had an added benefit – we were shooting for many days on the top of that train, and we shot different options of sequences. For editorial to have to piece all that together, and then decide what things they wanted to do after would have been a very time consuming process.

We didn’t have a lot of time on this movie to experiment with those kind of things, so fortunately we walked off the stage, and the very next day we had an editorial, a posted version, that final cam version of the shot that the editors could cut with. Of course, we could still make changes if we needed to, but in general, that simulcam drove the way they made their edits, and they could make very quick decisions, and that was really important for moving the story aspects of the sequence forward.

When we started on the movie, and I read the line in the script about the coaxium explosion and the scale of it – ‘Bigger than anything we’ve seen before’ – I was like, ‘Oh man, how are we going to do this?’ I’ve always in my own life referenced the Star Wars films in terms of having the coolest explosions ever, you know, back to Joe Viskocil’s explosions of the Death Star and the way those evolved over time. It was like, ‘How am I going to do something that’s different and unique in the Star Wars universe?’

So, I found some reference of a slow motion explosion underwater, and I thought, ‘Well, that’s pretty unique, I haven’t seen that before,’ and that explosion does a very unique thing, it explodes out, and then it collapses back in on itself, and then you get all the smoke and charge from that, and there’s actually two bright flashes. We started building on that idea, and we did some testing, and it turns out that the interesting way we achieved this was a very small charge about the size of an average firecracker in about a 100-gallon tank of water, small aquarium, but the event itself lasts, the entire explosion lasts for less than one-one-hundredth of a second. So if you shoot that at a regular frame rate, it’s just one frame of a light flash.

Even if you shoot it on as high speed as a digital camera can go, it lasts for about two frames, and we needed it to last for more than 10 seconds. I found a camera that would shoot at 125,000 frames per second, and that seemed fast enough, but in order to shoot with that camera, you need very special light, because you can either go outside and use the sun, which is a little unpredictable if you’re shooting in London in the darker part of the year, which is when we were shooting, or you can, in our case, we rented a couple of 99K lights that are designed specifically for this function.

When you’re shooting at 125,000 frames a second, most lights have a cycle where they turn off and on very, very, very fast, like HMIs are kind of famous – they flicker – but all lights flicker to some degree, except for these special lights that you could turn on for 10 seconds at a time or six seconds at a time. You’d trigger them on and they’d be extremely bright, just bright enough for us to get our element underwater, we’d set off the charge, run the camera, it had about a second and a half of exposure before it was out, and we’d get that element. Then in that one-one-hundredth of a second, we got enough amazing information out of that explosion to be the base element for that explosion that gets integrated into that mountain.

We shot the elements of the exploding coaxium, or the little charge underwater, from multiple angles, and we also 3D printed a model of the mountain, which is a section of the mountain called Tre Cime in the Dolomites. We 3D printed a small miniature of that about eight inches tall that we actually set the charge in, so the charge would interact with it, but as you would guess, it didn’t actually collapse the way we wanted it to. Our team at ILM actually built a digital version of the mountain, and sloughed off the various sections with a simulation to create that final illusion, and it all came together nicely.