Joe Letteri. Chris Townsend. John Nelson. Stephen Rosenbaum. Ben Morris. They all weigh-in in this piece for Cartoon Brew on how they worked with their director.

An amazing part of this piece is that I was able to speak to three of these visual effects supervisors (John Nelson, Joe Letteri and Chris Townsend) at VIEW Conference in Turin, Italy in October 2017. That’s three Oscar-nominated supervisors at the one event (incredibly, VIEW in 2017 also featured the Oscar nominated animated features The Breadwinner and Loving Vincent).

If you haven’t been to VIEW before, I strongly recommend it – in 2018 the conference is on October 22-26. It’s a small event compared to say a big SIGGRAPH or FMX, but this intimacy is VIEW’s selling point. You actually get to interact with the speakers themselves, and they are presenting on THE big films and projects of the year, as evidenced by the Oscar nominees who tend to be there.

Keep an eye out on vfxblog.com for information on what will be coming up at VIEW this year. 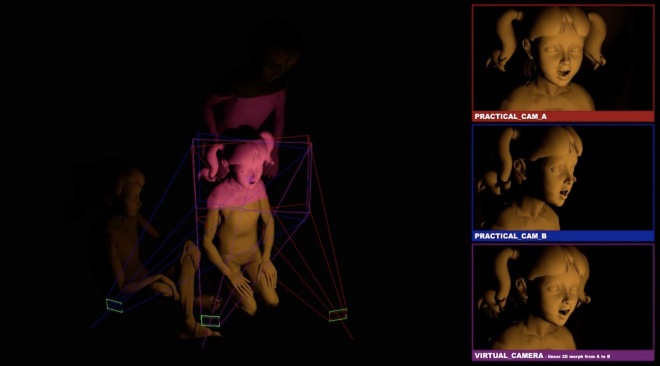 When Denis Villeneuve’s Blade Runner 2049 came out, I remember thinking one of the coolest scenes was Dr. Ana Stelline (Carla Juri) designing replicant memories – you see her scrubbing through moments and making slight tweaks and adjustments. One part of that scene features a children’s birthday, which was achieved by shooting real kids on bluescreen with multiple cameras, and then using projection mapping to achieve the little ‘scrubbing’ movements. BUF handled the visual effects.

Last year I had a quick chat to overall visual effects supervisor John Nelson about that work. And now that BUF has released its VFX breakdown for Blade Runner 2049 (which contains a whole lot of their other awesome shots), I thought I’d share what John told me about the birthday scene.

John Nelson: The kids were sort of a science project. Conceptually, the idea for that is that Ana makes memories but what we were thinking there is that she controls space and time. What I was told is we’re bringing in the kids. The kids will do this action. Then Ana will be able to scrub back and forth and move them around in time. I had to figure out a way to do that.

We shot the kids on bluescreen. There would be an interactive light that Roger Deakins put in. Then I would measure with a tape measure from the centre of the table that the kids were around to the camera. Then I would walk around in a 180 degree arc, drawing a line on the floor of the stage. So I had this 180 degree semi-circle with Roger’s camera right in the middle of it. Then I set up two cameras to the left and two cameras to the right so I had five cameras looking at these kids. Then we brought in the kids and then we made them do all of their actions.