Recently, I was able to interview several of the effects filmmakers behind Guillermo del Toro’s amazing The Shape of Water. You can check those pieces out at VFX Voice and Cartoon Brew. The film has also been shortlisted in the final 10 movies for consideration for the visual effects Oscar, and will be at the VFX Bake-Off today in Los Angeles.

Space battles are synonymous with Star Wars films. The original trilogy is fondly remembered for ILM’s use of motion control and miniatures. These days, like on The Last Jedi, digital ship models, photorealistic rendering and simulated crashes and explosions are of course the norm.

But to ensure the space battles in this latest Star Wars adventure echoed those memorable scenes from the first films, ILM employed several ways to bring them to life, even starting an in-house project to copy – at least to some degree – the look and feel of the original motion control miniature movements.

vfxblog recently visited ILM London to find out more on that process, plus a whole bunch of other things about the scenes in which Poe Dameron (Oscar Isaac) takes on the Dreadnought, and when Kylo Ren (Adam Driver) launches his spinning attack on the Resistance cruiser.

END_OF_DOCUMENT_TOKEN_TO_BE_REPLACED

Denis Villeneuve’s Blade Runner 2049 is one of the 10 films short-listed for the VFX Oscar. I’ve covered several aspects of the film so far including with overall visual effects supervisor John Nelson, but here is a brand new interview with Double Negative visual effects supervisor Paul Lambert. DNEG was responsible for views of future Los Angeles, Joi the holographic girlfriend of K, and a memorable ménage à trois featuring Joi and K and Mariette.

Check out the Q&A below, plus a befores and afters video breakdown of many of these visual effects and other shots in the film by studios including Framestore, Atomic Fiction, MPC and Rodeo FX. END_OF_DOCUMENT_TOKEN_TO_BE_REPLACED

Scenes of ships darting across a salt flat-like looking environment and tearing up shards of red crystals permeated the early trailers for The Last Jedi. But what was this world, and what was the major battle teased there?

The final film revealed the location to be Crait, the location of an old Rebel base where the Resistance now seeks refuge to send out a message for help. But the First Order launches a swift attack, and a battle along, and even below, its white surface plays out. Here’s overall visual effects supervisor Ben Morris from Industrial Light & Magic on what was required to bring the exciting Crait sequence to life – including its incredibly distinctive redness. END_OF_DOCUMENT_TOKEN_TO_BE_REPLACED

The moment Rey and Kylo Ren take on Snoke’s Elite Praetorian Guard’s is one of the many highlights from Rian Johnson’s The Last Jedi. I’ll have more on how Industrial Light & Magic crafted Snoke soon, but here’s overall visual effects supervisor Ben Morris on how that lightsaber fight scene, which was overseen by ILM London VFX supe Mike Mulholland, came to be, including the curtain of fire surrounding them and the weapons used by the guards. END_OF_DOCUMENT_TOKEN_TO_BE_REPLACED 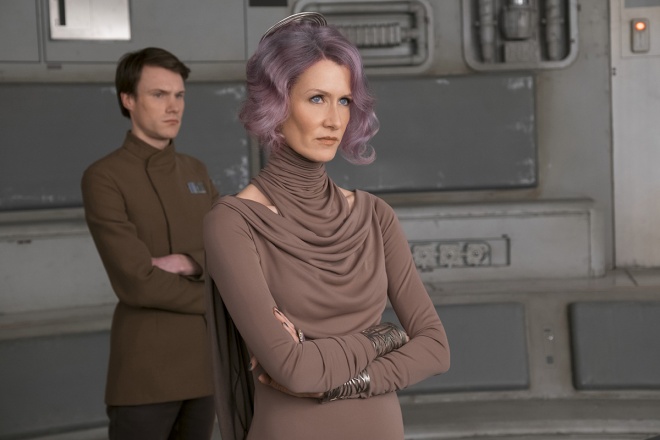 In the coming days I’ll have a bunch of coverage of the visual effects of Star Wars: The Last Jedi, based on a visit I made to ILM London just before Christmas. First up is a look at that stunning and surprising hyperspace moment when Vice Admiral Amilyn Holdo (Laura Dern) slams the Raddus – mid-hyperdrive – into Supreme Leader Snoke’s ship, the Supremacy.

The resulting white streak of an explosion is a heart-wrenching moment of sacrifice played out in complete silence. Overall visual effects supervisor Ben Morris from ILM initially thought the sequence might involve a ton of complex destruction effects simulations, but director Rian Johnson had something else in mind. END_OF_DOCUMENT_TOKEN_TO_BE_REPLACED

I first heard about FMX in 2011, just as I started writing full-time about visual effects. I went there – it’s in Stuttgart – and was immediately hooked. There’s a ton of super-cool visual effects, animation and CG presentations.

You could go to JUST THOSE all week if you wanted to. But why the conference is even better is the breadth of other things going on: recruitment, AR/VR/tech demos, in-depth software/hardware talks, screenings – and maybe the best thing: people. I’ve made a whole bunch of friends there who I probably see only once a year. And you get to meet a lot of industry members and artists. It’s worth it just for that.

Six-odd years later, I’m now on the Program Board for FMX, and I’ll be running a track at the conference in April 2018 called ‘Then & Now.’ I’ll talk more about what this will ultimately involve soon, but the first announced speaker in that track is the amazing Phil Tippett. That might give you a bit of insight into what Then & Now is all about.

Things start at FMX on April 24, 2018, which is definitely not very far away in terms of planning ahead. Find out more about some of the announced sessions in this press release, and keep an eye on fmx.de for more announcements.

Hope to see you there!