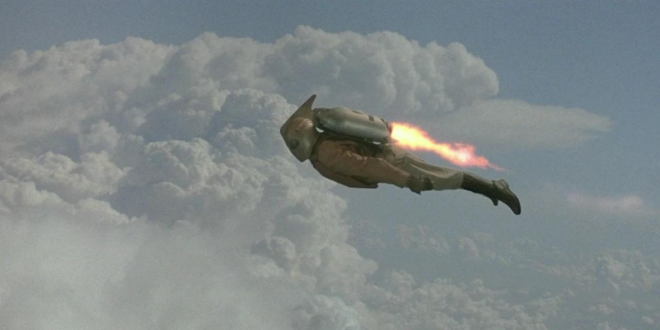 Joe Johnston’s The Rocketeer was released 25 years ago today – on 21 June, 1991. Tom St Amand was ILM’s stop motion animator on the film and responsible for bringing to life an armatured version of the flying character which would then be composited into live action aerial plates. vfxblog asked St Amand to go back a quarter of a century and discuss how motion control, stop motion and optical effects made those dynamic shots possible.

Peter Daulton was the cameraman responsible for filming the Rocketeer shots and programming the motion control camera moves. He and I determined that we could fabricate and animate an 18″ tall character, which would provide us a more detailed puppet than, say, a 12″ version. I arranged for reference photos of the actor to be taken, showing front and side views. I then enlarged these photos to the correct scale, and made detailed line drawings from them. Over these I drew the dimensions for the articulated armature that would go inside the figure.

I also made copies of the drawings and the photos, to give to Richard Miller, who did the sculpture, and to Jean Bolte, who made the clothing. Richard and Jean were excellent artists with many years of experience between them, and the final figure came out virtually indistinguishable to the actor in costume. Richard put some of the folds and wrinkles of the costume into the actual sculpture, and sculpted and fabricated the helmet separately.

We built 2 puppets, with the idea that a second setup could be put into work while the first one was filming. The armatures were basic human armatures consisting of ball joints, hinges, and swivels, and I designed and built them to have as few restrictions as possible. They also had multiple points in the hip and chest for various mount rods.

Peter and I would look at the storyboard for each shot and discuss what actions the Rocketeer would have to do, along with how he would be mounted onto a blue screen pylon. Working with his crew, Peter would then program the movement of the Rocketeer through space by moving the camera down a motion control track, also adding tilt, pan, and roll where necessary. For shots where the Rocketeer had to start far away and zoom way up close to camera, Peter had to use every inch of motion control track available to him.

Quickly developed black and white iterations of each shot would then be shown to visual effects supervisor Ken Ralston and to director Joe Johnston. When we got a buy off on the blocking of the camera and overall motion, I would then go in and animate, single frame, the body moves of the puppet. We intentionally tried to make the early shots of him look slightly out of control, like a man who was just learning to fly. Any animation I did with the body had to be timed with what Peter had done with the camera. The puppet was generally mounted onto a ball joint, which could be animated to make him turn and roll. In later shots we calmed him down, to indicate that he was getting more assured about flying the rocket pack. 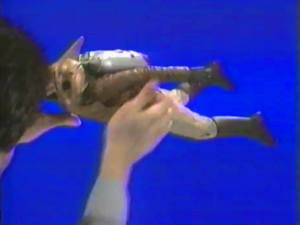 Joe and Ken were very much open to any suggestions Peter and I would make, and treated us like collaborators. Ken was a terrific animator himself and could act out stuff for us if we needed it, and Joe would sometimes lay a piece of acetate over the moviola image and draw for us exactly the pose he wanted. Their ability to do this saved us a considerable amount of time, because we got feedback instantly. Case in point: for one shot where they planned for the Rocketeer to fly up beside a plane and salute the passengers, I suggested that he accidentally hit the ‘off’ switch with his thumb, and plummet towards the ground. On the down shot of him falling away, we came up with the idea of him falling into a cloud and then restarting the jet pack while inside the cloud, so you would see the muffled ‘flash.’ Peter was an expert at animating camera moves that were naturalistic and not ‘smart,’ as you sometimes find in some CG work. Any ideas we could come up with that did not detract from the basic idea of the shot were welcome. Joe would not hesitate to add a shot if he thought it would make the cut better.

A typical shot might take between two to six hours to animate. For reference we looked at blue screen film of Billy Campbell ‘flying’ in the suit to get a feel for how he moved and tried to correct himself in the air. We tried to make whatever we did true to his body performance. Because the camera was moving during the exposure of each frame, we were able to incorporate natural blurs into each of the shots. For the scenes where he’s flying through a clothesline and picks up a sheet, we attached monofilament lines to the miniature sheet corners and manipulated them by hand while filming at approximately one frame per second.

The ILM 2-D animators, supervised by Tom Bertino, hand animated the rocket fire for the jet pack, and even put in extra flash bursts for when he flew close to camera. The blue screen shots were all skillfully composited on an optical printer by John Ellis and his crew. The model shop, led by Steve Gawley and Mike Fulmer, crafted a number of exquisite miniatures, including an amazing, quite large, zeppelin model that ended up literally going down in flames. Having a relatively small crew meant that we could screen dailies as a group, and people were free to comment on areas outside of their immediate expertise. 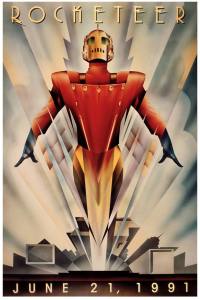 Working on The Rocketeer was a very rewarding experience for me, in terms of collaborating with people whom I had known and worked with for many years. It was truly a one in a million crew, and I believe the results hold up well even now. Within a year of working on The Rocketeer I also worked on The Nightmare Before Christmas and the original Jurassic Park. From that vantage point I could already see that computer graphics were going to play an increasing role in visual effects work and animation, but I also realized that, as with any tool, the result would only be as good or as bad as the hand that was guiding it. For some people to give the credit for good work to a computer is like giving the pencil the credit for a fine drawing.

Tom St Amand also worked at Walt Disney Film Productions, Tippett Studio and Imageworks, and is now a senior character animator at Digital Domain. Thank you to Tiffany Tetrault at DD for helping to make this interview possible.