In the summer of 2007, Paramount Pictures ran a teaser trailer for an unnamed film with the release of Michael Bay’s Transformers. It featured a group of New York friends at a party who suddenly witness a massive explosion and then see the head of the Statute of Liberty careening down a city street.

That teaser, which went majorly viral, was of course later revealed to be for the Matt Reeves’ monster movie Cloverfield, produced by J.J. Abrams. Eventually the ‘found-footage’ film released in January 2008 would go on to be a huge hit. But there were two fascinating things about that intense teaser; the first is that it was filmed largely while the production was still in prep as a test-bed for the hand-held VFX requirements of the movie.

It’s certainly not unusual for a different studio to tackle teaser trailer shots or for shots and elements to change from teaser to final – in fact, it happens regularly simply because these teasers need to get out there, quickly. But it is interesting to see what the differences were between the original teaser (above) and the final scene from the film (below).

Now, on the tenth anniversary of Cloverfield, and as a brand new viral marketing campaign for a third Cloverfield film directed by Julius Onah (once known as God Particle) gets underway, vfxblog revisits the original film’s teaser and the final Liberty head VFX from the film. END_OF_DOCUMENT_TOKEN_TO_BE_REPLACED

In 2005, a new show called Freddie starring Freddie Prinze, Jr. briefly made it onto US television screens. While the show’s one and only season may not have been that memorable, its opening titles were pretty cool – they featured a number of ‘Freddie’ clones getting up to mischief in one continuous shot.

Back then, I was able to interview visual effects supervisor Jeff Okun about that 24 second long clone shot. At the time, Okun graciously provided me with some nice concept and planning imagery relating to the work, but I never saw any final stills, or, crazily, even the actual opening titles themselves! YouTube had just started but there wasn’t much on there yet, and I was in Australia where I doubt the show ever eventually aired.

But just a few days ago I somehow came across the titles while flicking through YouTube, and remembered the fun notes Okun had provided to me about shooting the scene motion control, where the greenscreens would be placed to aid in compositing, and then on the challenges of post. Sadly, a previous incarnation of vfxblog was lost to a server crash, and only some of the site can be found on the awesome Wayback Machine. But the text is still there, along with a lone concept image. Anyway, I’d thought I’d now share the titles and Okun’s text with readers again for a fun look at how those neat titles were pulled off. END_OF_DOCUMENT_TOKEN_TO_BE_REPLACED 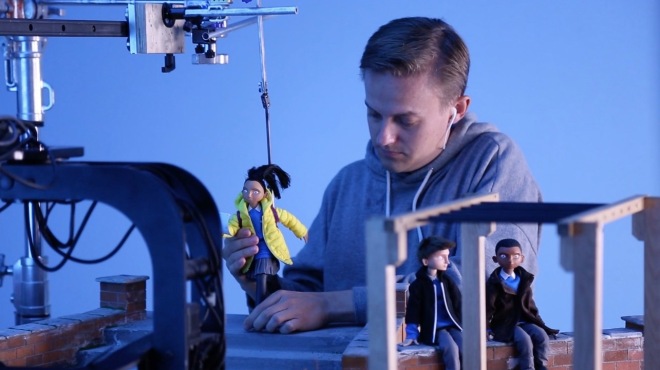 Head over to Blinkink’s website which was behind the production of BBC One’s Christmas animation film, The Supporting Act, for some neat making of footage showing the stop-motion in progress. The characters were animated that way, but their facial features were done digitally. 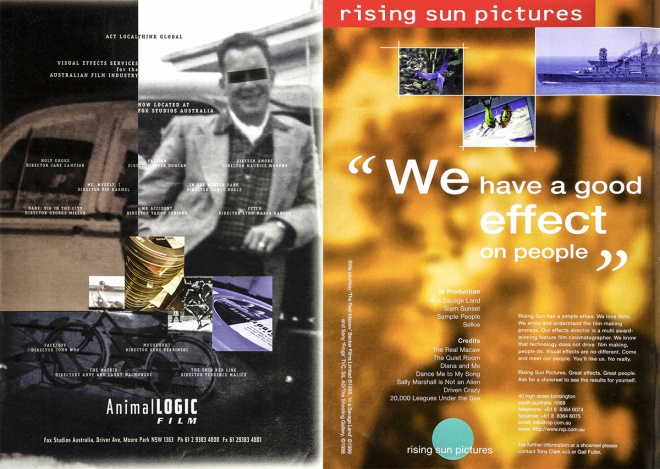 My thanks to ftrack for its continued sponsorship of vfxblog.com. As regular vfxblog readers would already know, this site is a repository of links to my articles for various publications, but there’s also a whole host of original visual effects and animation stories, interviews and observations that I also publish here, so it’s great to get some support in making that possible.

Many of my friends in visual effects and post-production already use ftrack as their go-to planning and project management tool. I recommend checking out their recent case study on Luma Pictures’ work for Thor: Ragnarok to find out more.

And if you’re also interested in sponsoring vfxblog, please email me.

If you haven’t seen Guillermo del Toro’s The Shape of Water yet, I heartily recommend you do. It’s simply a great story, which I won’t spoil. But it’s also incredibly engaging as a film that combines practical make-up and suit effects with digital augmentation.

Del Toro has taken that approach in several of his films – he just seems to ‘get’ what makes it work. In fact, I had forgotten that he used to run an effects company called Necropia. Over on Indiewire’s Filmmaker Toolkit podcast, interviewer Chris O’Falt talked to the director about, among other things, making decisions between practical and digital and about the language of visual effects. The comments are great, because we don’t always get to hear directors discuss VFX.

Del Toro says he learned special effects while making his short films. “I studied with Dick Smith, and for 10 years I ran a company that did animation, rotoscope, compositing, make-up effects, suits. And we did it efficiently, with very little money, and that discipline stays with you.”

In the podcast he praises the digital work of Mr. X in the film, in particular in simulating the hair of actress Sally Hawkins for some underwater scenes. And he notes that in working out during the pre-production phase of filmmaking what might require visual effects, he harkens back to what he learned from classic films.

“I studied the classical effects from classical films. I don’t know only the new techniques, I know the old techniques. When you were talking about compositing an image, the language is still the same – matte lines, roto, matte paintings. You’re using the same language as before. Grain, haze, atmospheric dispersion, specularity – the language is the same.”

If you’re interested in more on the effects of The Shape of Water, I wrote about the work for VFX Voice and Cartoon Brew. And definitely go see the film!

For Cartoon Brew, I sat down with ILM London to discuss Snoke, and how a bunch of changes were made during and after shooting to make the character more menacing.

When Denis Villeneuve’s Blade Runner 2049 came out, I remember thinking one of the coolest scenes was Dr. Ana Stelline (Carla Juri) designing replicant memories – you see her scrubbing through moments and making slight tweaks and adjustments. One part of that scene features a children’s birthday, which was achieved by shooting real kids on bluescreen with multiple cameras, and then using projection mapping to achieve the little ‘scrubbing’ movements. BUF handled the visual effects.

Last year I had a quick chat to overall visual effects supervisor John Nelson about that work. And now that BUF has released its VFX breakdown for Blade Runner 2049 (which contains a whole lot of their other awesome shots), I thought I’d share what John told me about the birthday scene.

John Nelson: The kids were sort of a science project. Conceptually, the idea for that is that Ana makes memories but what we were thinking there is that she controls space and time. What I was told is we’re bringing in the kids. The kids will do this action. Then Ana will be able to scrub back and forth and move them around in time. I had to figure out a way to do that.

We shot the kids on bluescreen. There would be an interactive light that Roger Deakins put in. Then I would measure with a tape measure from the centre of the table that the kids were around to the camera. Then I would walk around in a 180 degree arc, drawing a line on the floor of the stage. So I had this 180 degree semi-circle with Roger’s camera right in the middle of it. Then I set up two cameras to the left and two cameras to the right so I had five cameras looking at these kids. Then we brought in the kids and then we made them do all of their actions.

Check out that list again in the heading – those are some of the biggest visual effects  projects around, and they’re all going to be discussed by the studios behind the work at the upcoming SPARK FX 2018 in Vancouver.

It’s on Saturday 10th February at the VIFF Vancity Theatre, a neat cinema venue which will also host in the foyer a Career Fair featuring a ton of local studios looking to hear from potential artists.

I’m lucky enough to be one of the chairs of the event, so I’ll be there to watch the presentations – which by the way are from ILM, Weta Digital, Double Negative, Framestore, Oats Studios and Pixomondo – and to moderate one of the sessions.

The quick run down is:

9am – STAR WARS: THE LAST JEDI with Dan Seddon from ILM
10:30 am – THE VISUAL EFFECTS OF BLADE RUNNER 2049 with Chris McLaughlin from Dneg
12:00 pm – DISCOVERING THE VFX OF STAR TREK with Mahmoud Rahnama from Pixomondo
1:30 pm – REAL-TIME FILMMAKING: INSIDE OATS STUDIOS & NEILL BLOMKAMP’S LATEST SHORTS with Oats’ Chris Harvey
3:00 pm – PADDINGTON 2: THE CHARMING SIDE OF A CG BEAR with Claire Michaud & Pablo Grillo from Framestore
4:30 pm – WAR FOR THE PLANET OF THE APES with Dan Lemmon & Joel Whist from Weta Digital.

Check out the full program for the Saturday here.

Then, on Sunday 11th February, there’s another special VFX-related event with a Diversity Summit to be held at the Vancouver Film School. I’ll have more details on that soon.

Last year, SPARK FX was an absolute delight – the talks were incredibly engaging, and then outside the main speaking room the career fair was one of the busiest and buoyant I’ve ever seen.

Hope to see you in Vancouver.

In this new article for Cartoon Brew, I go through with Framestore animation supervisor Pablo Grillo how the studio crafted Paddington.