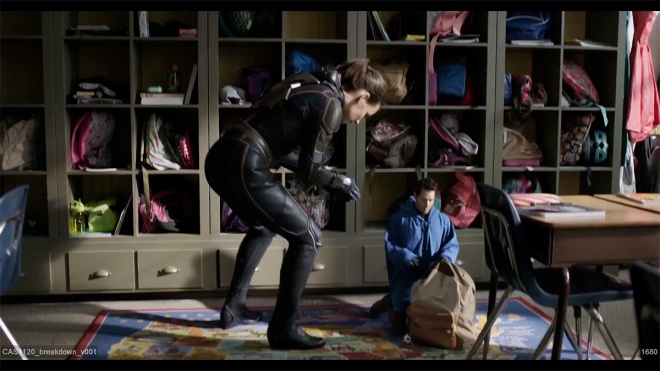 Ant-Man and the Wasp utilises the latest in visual effects tech to bring its story to the big screen. But some of the most fun shots in the film also have some of the most low-tech effects solutions.

These are where Ant-Man (Paul Rudd) visits his daughter’s school with Wasp (Evangeline Lilly) to retrieve a hidden suit. Ant-Man’s new suit is malfunctioning, causing him to grow or shrink unexpectedly. At one point he has to hide in a broom cupboard now too small to hold him, and later he and Wasp appear in the same room passing a bag between them with Ant-Man only half-size. Finally, Ant-Man has to climb down some normal sized steps but at his now half-height.

Several visual effects techniques overseen by VFX supe Stephane Ceretti – who describes the work in the video below – including forced perspective and meticulous compositing, made the sequence possible.

First, the broom cupboard shots. Here, Luma Pictures took separate elements and composited them together to make it look like Ant-Man was bursting at the seams of the room. “Ant-Man was shot in a green screen scale model of the room interior and The Wasp was shot using reference props to simulate interaction,” said Souls in a Luma press release. “The room interior itself was captured as a plate but also scanned in 3D, so we could easily recreate the shots that required a virtual camera move and to manipulate the ceiling when Ant-Man slams into it.”

In the classroom, Wasp helps Ant-Man retrieve a bag from a rack and they pass the bag and the retrieved suit between each other. The challenge here was that, since Rudd and Lilly needed to be different sizes, they weren’t in that same room together.

“For the backpack, we had two different sizes,” says Ceretti in the official Marvel video, above. “We had the real size which is a normal backpack for a kid. And we had a version of the backpack that was double the size that had been made by the props people. He takes the backpack and gives it back to Evangeline, but they didn’t do it at the same time. He was carrying the big backpack and she was carrying the small backpack, and right in the middle, there’s a transition with a CG backpack.” 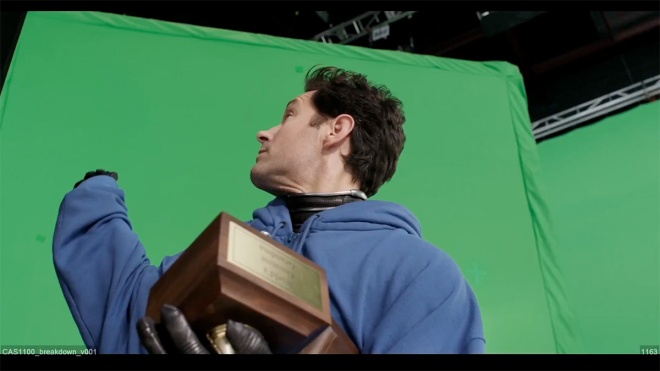 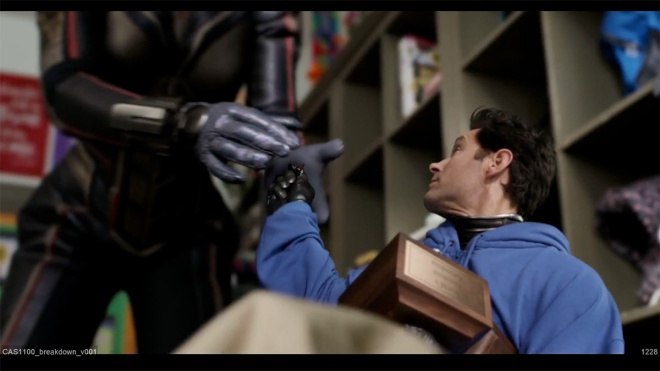 Then Wasp and Ant-Man run outside to a waiting van, with Ant-Man having to negotiate some oversized – for him – stairs. Method Studios visual effects supervisor Andrew Hellen, who worked on various parts of the school sequence, describes how this section was achieved.

“They shot a plate of just the stairs without Paul Rudd in it in Atlanta, then repeated that move on a scaled up set with Scott running down some scaled up stairs,” says Hellen. We ended up replacing his legs with CG, just because things weren’t lining up perfectly, and that let us control things a bit better. We matched the two plates together, and had to build some terrain and some grass. And we also put Wasp in there.” 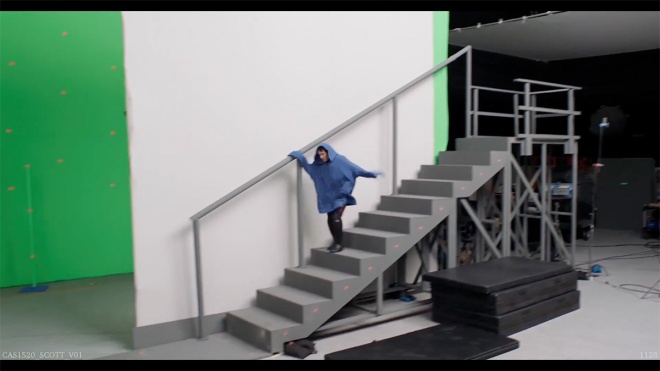 In a film with such large-scale complex visual effects work, it’s always nice to see some of these clever solutions for smaller shots – and ones that the audience certainly responds affectionately towards.

There’s more coverage of Ant-Man and the Wasp coming for other publications and at vfxblog.com – stay tuned.