Perhaps taking inspiration from The Tale of the Three Brothers animation in Harry Potter and the Deathly Hallows – Part 1, Wonder Woman has its own animated sequence. This is seen early in the film when the history of the Amazon women warriors, and their relationship to Zeus, the leader of the gods and Ares, the god of war, is told by Queen Hippolyta to a young Diana.

Looking for a way to depict the history in a Renaissance style, director Patty Jenkins came across a stereoscopic 3D reconstruction of a famous 1878 painting by Jan Matejko called ‘Battle of Grunwald’ (see below). That reconstruction was carried out by Polish studio Platige Image and allowed viewers to see – in 3D – certain aspects of the painting’s characters and action. The director, related overall visual effects supervisor Bill Westenhofer to vfxblog for this first in a new series called ‘Quickshots’, thought something similar could be done in Wonder Woman.

“So then we set out to make our own Renaissance / Michelangelo-esque painting of the history of the Amazons,” says Westenhofer. “Concept designer Aaron Sims brought in some of his artists, and we actually auditioned people, because to paint in that style – there’s a modern sensibility you had to almost unlearn.”

The style of painting was actually a significant challenge, as Westenhofer examines further. “We tend to paint things with realistic light sources, and have consistent lighting. If you look at the Sistine Chapel, things are modeled, but it’s almost an ambiguous light, and that’s what Patty wanted. To get these Ruben-esque characters in different sections took a lot of skill. I think Michelangelo had 15 years; we had about three months to make this painting.”

Once the painting was complete – an overall mural was done and then split into different painted sections – Platige took that imagery and made geometry out of specific characters and sections. Then the painting was projected onto that geometry. While their previous effort had been largely static, this time Platige animated parts of the painting, such as the cloth on characters and the ocean and clouds. This meant characters and cloth were actually rigged to move. A few dynamic moves even made use of the 3D Ares digi-double made for the live-action portion of the film, re-made to be stylized like the rest of the moving painting.

See a gallery of images from the mural paintings by the Aaron Sims Creative team below. 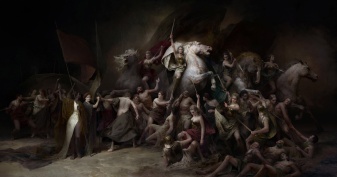 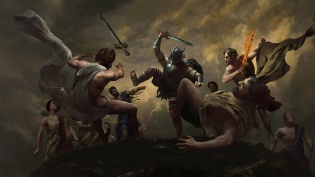 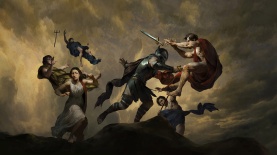