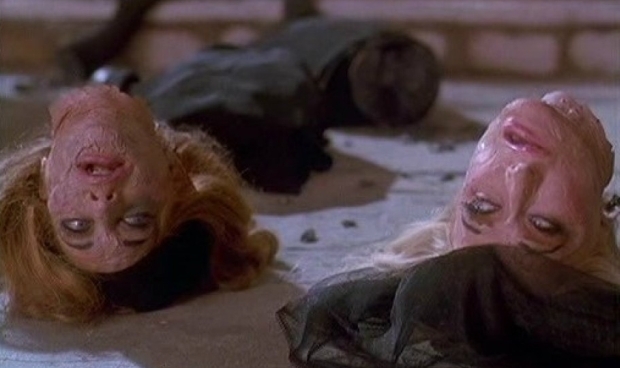 I recently spoke to visual effects supervisor Ken Ralston about his work at ILM on Death Becomes Her for the 25th anniversary of the film. The interview received some surprising attention; the film might not have been a hit but the practical make-up effects by ADI and ILM’s innovative ‘digital wizardry’ both continue to be fondly remembered.

Another ILMer on the show, Alex Seiden (who had worked on Terminator 2 and would go on to contribute to Jurassic Park), contacted me with a super-fun story about his last minute work on Death Becomes Her’s end scene – where Meryl Streep and Goldie Hawn’s characters are at this point only their heads talking to each other, after they both take a major tumble down some stairs at a funeral. The shot was a long one – over 20 seconds – and was filmed as separate motion control passes that needed A LOT of hand roto in a very, very short space of time.

Below, Seiden relates how he helped make that possible. But first, watch the scene.

Alex Seiden: I wrote one piece of software for Death Becomes Her. It was the most productive two hours of my life. The last shot of the film shows Meryl and Goldie’s broken, disembodied heads talking to each other. Well, that was a late change to the film, shot as a pickup late in production only a few weeks before the film was going to be released. It was a pure comp shot, no 3D CG, but it was nearly 25 seconds long, and it needed hand-roto’d split mattes to combine several different motion control passes.

Everyone had pretty much wrapped on the film (we may have even already had the wrap party) so it was pretty much me and the roto artist working in an empty shop. So, the first day I’m getting my comp script together I go over to roto to see how long it’s gonna take to get the mattes done. And the answer I get was, ‘Well, it’s nearly 600 frames long, so two weeks.’ Which, uh, would not work with the schedule.

And I’m mystified, because we have some fancy expensive digital paint package that actually let you draw splines to do the rotoscoping (I think it was called ‘Amazon’). And since these didn’t need to be tight mattes, I just assumed we’d be doing it on 8’s or even 16’s and interpolating. But the #@#$%^&* thing didn’t interpolate! You could draw a spline, and move around the CVs, but you had to do it for every frame (and manually ‘render’ and save out the image for each frame too).

So, after picking my jaw up off the floor, and cursing, I went straight back to my desk. In about an hour, I had reverse-engineered their file format, and after another hour, had written a program that would interpolate any missing frames. (Plus, as a bonus, would write out a macro to automate the tedious process of rendering and saving the mattes.) And we had our mattes the next day!

We probably used that POS software for the next couple of years, and it without a doubt saved several thousand person-hours worth of work. So, I probably produced 6 figures worth of savings for each of those two hours I worked on that little ‘rotosplines’ program.